Last weekend Vickie Machado took part in the Archdiocese of Miami’s Young Adult Papal Visit to Cuba. Below are some of her reflections on Cuba and her pilgrimage to see Pope Francis.

We arrived Saturday late morning into La Habana, eager to take part in Pope Francis’ momentous journey. None of the young adults in my group had been to Cuba. For me, this was not only my first time to this island, but it was also my first real experience outside the United States. Though less than an hour’s plane ride from Miami, Cuba seemed new and untainted. All eyes were on this small country, a place devoid of advertisements, saturated with infrastructure from the 1950s, and crawling with news cameras expectantly awaiting the Pope’s arrival. Like the other pilgrims, I was greatly looking forward to seeing Pope Francis and hearing the message he carried with him. 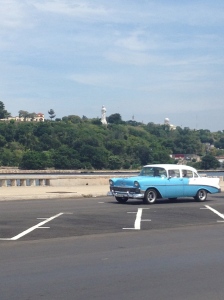 After checking into our “vintage” hotel, we hit the streets of Vieja Habana, exploring plazas, snapping photos, grabbing lunch at a nearby paladar and purchasing our allotment of Cuban cigars. The shock set in when we drove to Calle 30 y 31 in Miramar to wait for the Pope’s motorcade. The media was everywhere. Everyone wanted to take part in this historic moment. NBC National followed our group, taking photos, filming video and conducting interviews as we waited for a glimpse of the Holy Father. As Pope Francis rode by— a bit faster than expected—the hype increased. The crowd was flooded with energy and the media was quick to start their questioning. Michael Williams of NBC News asked me if this was a life changing experience. With hardly a minute to reflect, I responded that it was definitely life enhancing. It was a less than ideal answer and didn’t make the news. I thought about this question more at dinner and into the night. Do I consider the few seconds it took for the Pope’s caravan to drive by, a life changing moment?

I continued to ask this question as I listened to his Mass on Sunday morning in the Plaza de la Revolución packed with thousands of Cubans and other pilgrims. A beautiful Cuban choir led up to his Mass. Gaining bits and pieces, the leader of my group, Rosemarie, translated his sermon about the importance of service. Still, I wondered if this was a life-changing experience.

It was the young adult gathering Sunday evening where the magnitude and importance of Pope Francis’ presence and my own journey set in. After distributing rosaries, bracelets and t-shirts, my group found a shady spot under a tree to await the Pope’s arrival. We had plenty of time— arriving at 2:30 pm, four hours before Pope Francis was scheduled to address the crowd. During this time, I started talking with a couple young people, a 26-year-old former bartender and a 20-year-old student studying information technology. They practiced their English, which was quite good, while I worked on my Spanish. I learned a great deal about life in Cuba: jobs, wages, rations, past times, music, and general understandings. Although Cubans make roughly a dollar a day, goods such as cars, clothing, cell phones and travel are still incredibly expensive: $30-92 for shoes; $25,000-250,000 for a car; $200 for a passport. More than once I was told the math used in the States does not apply to Cuba, since one US dollar converts to one CUC or 25 CUPs  (used for purchasing rationed food).

Furthermore, it blew my mind to hear the Internet was only recently introduced (my new friend said in January 2015!). Still people must go to WiFi (pronounced “weefee”) spots and pay $2 per hour to gain web access. While change may seem slow to me, it is rapidly increasing and it seems to be commonly felt among many young Cubans. Pope Francis’ visit further extended this feeling as he has repeatedly voiced his stance concerning the U.S-Cuban embargo.

Talking with these young adults added tremendous depth to my pilgrimage. My journey meant so much more to see the passion in their eyes and understand the hope in their hearts. There was so much joy, love, and kindness in their stories, reflecting the message presented by Pope Francis.

At 6:40 pm, the Pope spoke about hope to the young adult crowd of 5,000. Hope is hard work, but it is worth working for. It is the path of life and deeply within our faith. Meeting my new friends enlivened the Pope’s message. Though this was simply a moment—drawing from Pope Francis—it is memory and discernment, which makes the path of hope that we must follow.

When practicing my Spanish, my new friends told me poco a poco, little by little. Often times we forget that change is a process. We don’t realize a life changing moment when we are in it. Sometimes it takes some reflection and understanding to connect the dots.

Poco a poco my journey began to make sense and hold a deeper meaning. Yes, seeing the Holy Father was an incredible sight, but it was the context—the young Cubans I met, gaining an understanding of their livelihoods, and connecting it to the Pope’s message and that of my own Christian faith—that carried the most meaning for me.

Like my pilgrimage, life is a journey. It is what we take from these moments that offer the impact. It is exciting to think how people will take this experience and enact it in their own lives, community, and world. The Pope is reiterating the Gospel—Love God and love others. Love is an action. Now, more than ever, faith in action is needed. It’s coming poco a poco.

This summer I had to opportunity to review a new book Rewilding the Way: Break Free to Follow an Untamed God, by Todd Wynward. It reminded me of the discussions and issues we tackle as Eco-Stewards. Below is my short book review. I hope you get a chance to check it out.

Todd Wynward ‘s Rewilding the Way: Break Free to Follow an Untamed God, does an incredible job of weaving Christianity with environmentalism. Tackling issues like affluenza, over-consumption and climate change, Wynward goes beyond the notions of a collective creation care and takes a look at individual practices and underlying themes in relation to faith. How does one follow Jesus Christ, a teacher who traveled the region spending time with low society characters? More so—how do we as children, sisters, brothers, mothers, and fathers live in the world but not of the world? How does one negotiate the realm of work, family life and spirituality? Drawing from his wilderness experience, Wynward advocates a return to the wild. He asks his readers to go cimarron, “a Spanish term for a slave or domesticated animal gone free.” He pushes his readers to re-evaluate not just life but the paths Christians embark on as he re-invigorates scripture stories and parables.

Perhaps the most compelling aspect of this book is that Wynward provides readers with conviction. This is not the fire and brimstone conviction but rather a grace-filled understanding of life. As Christians, we must continue to strive to love God and love our neighbors. With our rapidly expanding world, this means looking at our choices and evaluating our lifestyles, while still considering how to live in the world. Wynward does not condemn the sinner or the over-consumer, but rather recognizes we all fall a bit short in this world. At the end of the day, God’s love is delivered to us all.

The Eco-Stewards Program is a creative community that shapes, inspires and connects young adult leaders (ages 20-30) through storytelling and place-based pilgrimages focused on faith and the environment.